Caring for Brooklyn’s “Urban Forest,” One Tree at a Time

On a hot, overcast Friday morning, nine volunteers met up on Third Street in Gowanus ready to get their hands dirty. For about two hours, the volunteers spent time cleaning, de-weeding, watering and mulching young street trees in the area, ensuring they would be able to survive and thrive in the harsh urban environment.“The first five years of a street tree’s life, it’s at its most fragile,” Nelson Villarrubia, Executive Director of Trees New York, told Bklyner. “That’s when it establishes itself. It’s dealing with litter, compacted soil, weeds, drought or heat, pedestrian traffic. The majority of environmental benefits from trees come when they’re larger. So getting volunteers to help establish these trees ensures that it lives to be a large tree.” 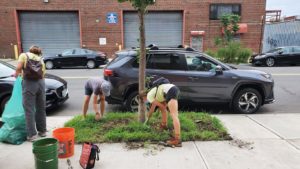 Trees New York organized the event in partnership with the Nature Conservancy and the Gowanus Canal Conservancy, one of several such initiatives being organized this fall. The goal, the groups say, is to both care for and raise awareness of the importance of New York City’s “urban forest,” the hundreds of thousands of trees that help buffer the city against the threats from heat and flooding, absorb carbon, and make streets and parks more attractive.

There are over seven million trees planted in New York’s public and private spaces, the Nature Conservancy estimates. But although some policy initiatives, like the MillionTreesNYC program in 2007 and the Cool Neighborhoods NYC initiative of 2017, have produced investments in the city’s treescape, the conservancy says there is no comprehensive plan or sufficient, long-term funding for managing the city’s trees in the years ahead.

During heat waves, trees can reduce sidewalk temperatures by as much as 45 degrees Fahrenheit, and by keeping neighborhoods cooler, reduce our reliance on energy-hungry air conditioners.

“Today, we urgently need a climate-resilient future, healthy and accessible outdoor spaces, and a green and just post-COVID recovery,” wrote Nature Conservancy executive director Bill Ulfelder in the introduction to the NYC Urban Forest Agenda report it published this June.

“Our urban forest can play a pivotal role in helping us achieve all of these. A thriving and healthy urban forest will help our city adapt to climate change, foster greater social equity and racial justice, and aid in the city’s economic recovery.”

The Nature Conservancy, Trees New York and the Gowanus Canal Conservancy are all members of a coalition called Forest for All NYC, which seeks to advance the resiliency and climate goals outlined in the report. Chief among them: achieving 30% tree canopy cover across the city by 2035, up front the 22% measured in 2017.

Built into that goal is an equity component. Both Forest for All NYC and other organizations are working on detailed analyses of the city’s existing tree cover, but existing research has already made clear that low-income and nonwhite communities in Brooklyn and elsewhere have fewer trees and disproportionately bear the burden of extreme heat and air pollution.

Addressing those issues will require government action. But the groups advocating for the city’s trees also organize volunteer events because, they say, the public has an important role to play.

Trees New York trains about 200 volunteers every year as “citizen pruners” who administer care to about 2500 street trees annually. In 2020, they also planted 54 new trees on property owned by the New York City Public Housing Authority, 52 trees across the Bronx, and 38 trees on Randall’s Island.

“People’s understanding of issues of climate change and the environment has been a little more abstract in the past and I think it’s becoming less so now,” Villarrubia said. “So I think that’s drawing people, they want to be part of the solution.”

That work, advocates say, can also build relationships and knowledge amongst neighbors, and encourages them to see the city’s trees as a community priority.

“Whether you are writing your legislator urging them to commit support to the urban forest or watering the street tree outside your door,” said Tami Lin, Deputy Director of the Nature Conservancy’s Cities program in New York, “there are many ways to be a tree steward and we all have a part to play.”